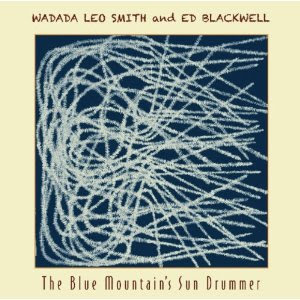 Wadada and Ed Blackwell. That's a pairing that makes absolute sense. Yet to my knowledge there has been no recorded evidence of the two together in duet.

Until now. The Blue Mountain's Sun Drummer (Kabell Records 111) documents a live appearance of the Smith and Blackwell at Brandeis University in 1986. The recording has excellent clarity. It was originally broadcast on local radio.

Comparisons are inevitable with Mu, the two-record set of Blackwell and Don Cherry in duet. That one of course put across a way to keep things interesting and exciting without recourse to a full band. Much of that had to do with Mr. Blackwell's treatment of the drum set as a kind of Afro-percussion ensemble. His work with toms and snare to create cross rhythms of course is legendary and one of the most recognizable drum styles in the history of music.

Blue Mountain is not Mu, nor is it intended to be. The creative trumpeting and conceptual inspiration of Wadada puts things on another wave-length. And Ed Blackwell's drumming at that point had matured and mellowed to a classic series of statements, all essential, nothing superfluous.

There are lots of great things on this set. Wadada does a little singing in a kind of universal Afro-folk channel. It works well. The rest is prime Smith-Blackwell in a loose and free-swinging mode. Only six years later, Eddie Blackwell would be gone from us. Here it is almost 20 years later and his influence and presence are still so strong it is like he never left us. He hasn't. The music is still here to be revered and appreciated. And with Wadada Leo as a running partner on this concert, you could not ask for better company.

I'd say it was a triumph. It is in many ways. But it is also a reminder about how none of us will be here forever. This is music to be savored over the years. This is not the flavor of the month. Dig in, dig it and honor our significant forebears. And those still here, like Wadada, making important music as ever.
Posted by Grego Applegate Edwards at 4:22 AM