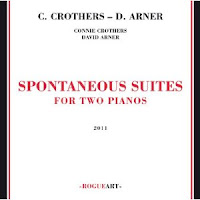 That modern improvised music for two pianos is a rarity partially has to do with logistics. It's not all that easy to find two good instruments and it takes some doing to combine that with two players who are both on-hand and game at the same time as the pianos. That's perhaps too facile an answer but in the economics of improvised music practical considerations are not unimportant.

Be that as it may the teaming of Connie Crothers and David Arner was an inspired idea that has led to some beautifully musical results. And to have their interactions available on four full CDs in the box set Spontaneous Suites for Two Pianos (Rogue Art 0037) is not only revelatory of just how inventive the two are, it is a musical project that brings a great deal of enjoyment and satisfaction to the persistently attentive listener.

One of my first important jazz experiences was when I found a copy of an album that contained "Tonk," the two-piano duet between Duke Ellington and Billy Strayhorn. The fullness of melodic and harmonic possibilities realized on that three-minute 78 still has resonance in my mind as a high point of that era. And in many ways what Ms. Crothers and Mr. Arner do on the sides at hand are a sort of blossoming of possibilities latent in "Tonk."

To be sure, I do not mean to suggest that the music hearkens back to an earlier period. It does not. However both Connie and David are players that have thoroughly immersed themselves in the history of the music, pianistic and otherwise, and do invoke the essence of jazz pianism as they launch into stratospheric flights of invention.

This is thoroughly spontaneous music, free if you will, and avant. There are at times dense clusters of pitches less centered in a tonal-pivot point than they are all-embracing of the full 12-tones available; other times there are passages that suggest tonalities as a visual artist may sketch out a representation, only to thicken the image with elements outside the central core to eventually transform the original representation into something else altogether.

So too the two pianists open the music to total, spontaneous possibility, sometimes by initially referencing a tonal cell as an artist would sketch a figure. Sometimes there are endlessly modulating lines that race ahead in perpetual re-creation. At all times Ms. Crothers and Mr. Arner interact beautifully, each complementing the other so fully it becomes difficult much of the time to separate out each part, to sort out who is playing what. And surely that was their objective from the outset--the two create freely derived two-piano music, more than a music for two separate musical personalities.

This is not a cutting contest, surely. It is an immersion in the creation of a body of spontaneously dense four-hand musical discourse. The results at times have perhaps as much relation to the two-piano music of Aloys and Alfons Kontarsky in the original recording of Stockhausen's Mantra as they do to "Tonk." In other words this is an improvised kind of new music as much as it is a personal, real-time compendium of avant jazz. In other words it creates a place where the music is free to develop unconstrained by the limitations of any particular style camp.

And in the process we gain four volumes of very advanced pianistic creation. I will not attempt to analyse or describe fully the music here because it is in its unfolding and its perpetual capacity to surprise with unabashed candor that the music is meant to be heard. At least that is my take on it. And in the process all that Connie Crothers and David Arner are and have been musically comes into play.

There is never a sense of indirection or lack of purpose just as there are no second takes. Each suite unfolds in its own way with a sense of surety and direction rather remarkable for something completely spontaneous. This of course has to do with the synchronous rapport and musically sympatico outlook shared by the two artists. They have, can and will do other sorts of things with their music. But for this long moment in 2011 they have succeeded in creating a two-way simultaneous dialog that impressively forges a language uniquely suited to the moment. In the process they scale some high precipices with the surety of two that routinely take their music to very advanced places. Surely by combining their reaching upwards into a two-piano twosome they get to places quite rarified and bracingly ahead of the pack.

The music sustains an inspired attainment for something like four hours. And it does so in ways that provide the attentive listener with endless musical terrain to explore and re-explore with great pleasure and satisfaction. It is one of the finest improvisational solo-pianistic moments we have experienced in recorded form to date, to my mind. Do not let this one slip by. It will repay your attention with an enthralling sublimity.
Posted by Grego Applegate Edwards at 5:12 AM