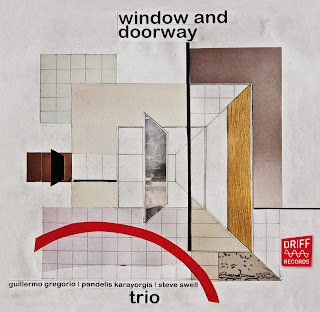 Part of where free-avant improvisation has been going has something to do with "New Music", that is it draws freely upon non-jazz concert elements at times but still has the expressivity and immediacy of jazz. We can hear this in a vivid way from three masters of free music who improvise and compose in equal measure. I refer to the trio of Guillermo Gregorio (clarinet), Steve Swell (trombone) and Pandelis Karayorgis (piano) in their live performance at Firehouse 12 in New Haven, released on CD with the title Window and Doorway (Driff 1301).

Each of the trio contributes two or more compositions as springboards for the improvisations and there are also three collective works.

Steve Swell should be known to all as at the top of avant trombone player-jazz composer-bandleaders. Pandelis Karayorgis may not be as well-known out there but has built a considerable reputation (deservedly) as one of the brightest new voices. Guillermo Gregorio I do not know all that well, but on the basis of this recording he certainly is right up there with the other two.

The music is abstract without being arid. It has soul and brains, too. It is doubtless one of those sleeper disks--something of great impact and avant beauty but not as well heard as it should be. The performers come through with a group synchronicity born of compatible, fertile musical imaginations and sensitive improvisational reflexes. The compositions set the mood and provide rough maps of the musical terrain which the trio covers with agility and creative thrust.

It's a disk to be heard and appreciated. Gregorio, Swell and Karayorgis are dwelling in advanced, frontier musical settlements and they stake out the territory with authority.