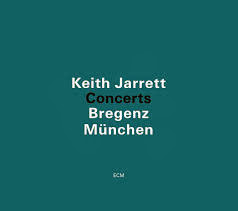 If you've listened carefully enough and across the board historically to Keith Jarrett's solo piano recordings, you've no doubt seen patterns emerging. Perhaps you can divide them up into three periods, with the first ending in 1981, the second covering the rest of the '80s and at least part of the '90s, and etc.

There are the sorts of improvisations he did and still does, and some he doesn't do as much now, and finally things he does now he mostly didn't then. There are those gospel-voiced rousers, there are romantic harmonic improvisations that could be from the time of Liszt, there are outnesses, there are the hypnotic trance repetitions, there are rockers, there are funk boogie-woogie take offs that go where only Keith would take them (but of course are imitated these days too), there are standards, mostly in the later period, and other things besides. He has of course made a huge impact over the years with these solo performances. There have been plenty of lesser imitators, some straying into new age, and there have been those who have taken the influence to places of their own. But aside from Cecil Taylor, no one has had such a dramatic impact on the scene. Keith and Cecil are two poles in a magnetic field that of course is still as powerful as ever. At least that's how I look at it.

If you count the first period ending in 1981, then his Concerts, Bregenz, Munchen could be the culmination of that period. The original release covered all the Bregenz and a brief part of the Munchen concerts. Now we have a reissue in 3-CDs that for the first time covers the complete Munchen concert as well (ECM B0019483-02).

I tend to gravitate toward this period, the initial Facing You onwards to this end point. Not that I do not appreciate the later solo improvisations, but there is a peak to be heard in those days that was not duplicated as much as it all changed up and Keith in part began exploring some other territories.

With the now complete three-part version of Concerts we can hear the expressive highs, a little of the transitional tentativeness, but mostly the very satisfying brilliance that put him so much to the forefront in those days.

Now would I like to hear Keith perform again in a quartet? A big band? Do more orchestral works again? Well, sure I would. But whether or not he does that I still find his solo work totally compelling. I don't feel satiated even if there is an awful lot of it out there. Concerts would be one to hear even if you have no inclination to become a solo Jarrett completist.

It may not be his absolute best--but then I would be hard-pressed to chose only one or two. It's up there with prime examples of that period. So if you do spring for it, and you know what to expect, I sincerely doubt you'll be disappointed. He was (and is) brilliant. That initial take off and flight was an exciting moment for him and for audiences. You can hear that on these sides.