Garrison Fewell, Outside Music, Inside Voices 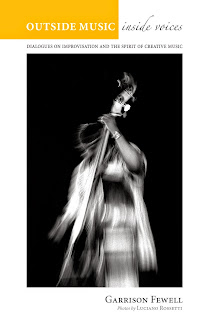 We've known Garrison Fewell on these blog pages as an important jazz composer, guitarist and bandleader. But today we look at him as an author. His latest book, Outside Music, Inside Voices (Saturn University Press, 329 pages, paper, $25), examines the creative process among 25 leading lights in advanced improvised music today, music sometimes referred to as "free jazz."

The book presents 25 fairly in-depth interviews conducted by Garrison over the course of nearly a year, interspersed with good photographs of the artists concerned by Luciano Rossetti. The basic issue involves spirituality as a component of or impetus to the creative act. "How much does your music," Garrison asks, "get its energy and being from a spiritual mind- and body-set?"

The answer, which may come as a surprise to those who are not immersed in the contemporary improvisational world, is a pretty resounding "yes, it does, in important ways." So we hear from such luminaries as the late John Tchicai and Roy Campbell Jr., but also Steve Swell, Nicole Mitchell, Dave Burrell, Joe McPhee, Matthew Shipp, Wadada Leo Smith, and on from there through 17 others.

And no, it is not that all of them practice a particular form of organized religion, though Buddhism does seem to be an element in some artist's lives, but rather that the sounding of the music has a spiritual intent or immersion-component. Anyone who experienced the first flowering of the "new thing," especially via later John Coltrane, should not be surprised to hear this. Nevertheless what matters, and what the book brings out strongly, is exactly how each artist talks about her or his music in these terms. Are there set practices they use to bring such things in their music? Are there political-social components? How do they relate their self-in-spirit to other musicians and the audience in the playing situation? How can such improvisational ways of being be of general use to the public at large in their own lives?

These are just some of the questions and themes that run through the dialogs. In the end readers get a rather full picture of open-form improvisation as a kind of way of life. Everyone seems to have something interesting to say. Not everyone puts a great deal of active thought into the way of the spirit and their music, mind you, but virtually everyone acknowledges an extra-material inspiration that goes into their spontaneous being in performance.

The book moves along at a rapid pace and brings insights to musicians, music fans and curious outsiders alike. It's a great read, something for a general audience concerned with creativity and of course for the avid new music listener and performer. Those who do not understand "free" music should get a framework that will help them grasp the creative processes and motivations of the players. Those who do get the music already will nonetheless benefit from the ideas so nicely expressed by some of our greatest living practitioners of the improvisatory arts.

Very much recommended. An absorbing and inspiring discussion.