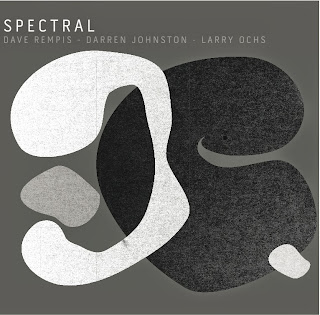 When avant chamber jazz turns its attention to small ensembles of horns the emphasis generally turns to color and texture and sometimes less to rhythmic momentum. The playing routines and structure brought to the music, either spontaneously or in terms of pre-planned sequences, usually put the emphasis on the personal intermixtures of the stylists involved.

We can hear this readily and notably in the three-horn presence of Dave Rempis (alto sax), Darren Johnston (trumpet) and Larry Ochs (tenor and sopranino saxes) on the recent album Spectral (Aerophonic 006).

This gathering conjoins the Chicago-based Rempis with two key players associated with the West Coast (Johnston and Ochs) for a series of seven improvised segments that excel in the inspired variety of sounds the three make together, seemingly with pronounced improvisational spontaneity.

Larry Ochs of course is best known for his key association as a member of the Rova Saxophone Quartet, but all three are no strangers to the horn-based chamber style.

All three thrive in their association here. They listen closely to one another and respond with extraordinarily creative utterances. This is music that can go from volcanic explosions of energy to more subdued melodic interplay. The timbres evoked show the great control the artists have gained over the sound possibilities of their respective instruments and the note choices open up the musical universe to subtle or exhilarating melodic variations, sometimes one following close upon the other.

In the end we hear great things, the art of three excellent improvisors forming a synergy that ranks with some of the best such outings in recent years. It is fascinating and ever-moving.

This is real-deal freedom!