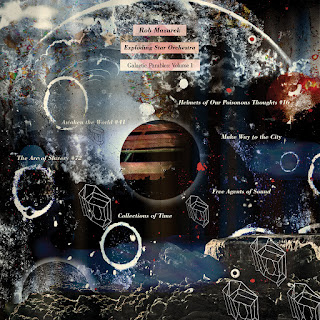 Rob Mazurek, cornet master, composer, bandleader, has gone about his way in the past decade making some of the most interesting, provocative and forward-moving avant jazz recordings of all, with or without his Exploding Star Orchestra. Now we have a 2-CD set with that orchestra in some of his most ambitious and successful music yet, the Galactic Parables, Volume 1 (Cuneiform).

It comprises two overlapping versions of the multiform work, for recitation, large band and electronics. The first disk was recorded live in Sardegna, Italy; the second in Chicago. The band differs somewhat in personnel on the two sets, but we hear from some of the best either way. Rob appears throughout on cornet and electronics as does Jeff Parker on guitar, Damon Locks does text recitations and electronics, Matthew Bauder is on tenor and clarinet, Angelica Sanchez is on piano, John Herndon, drums, and Matthew Lux on bass. The Italian set includes Mauricio Takara on percussion and electronics, Guilherme Granado on sampler and synth, and Chad Taylor on drums. The Chicago set includes Nicole Mitchell on flutes and voice. I list the personnel in full because the music has much to do with them, their open improvisatory acumen and their well-healed performance of the compositional elements. And they are some heavies!

It is on both disks an apocalyptic, cosmic, beautifully out confluence of recitation and large band sound, electronics and instrumental textures. The texts are poetic and at times altered electronically. This is free big band as lively and innovative in its own way as Sun Ra's classic assemblages, both out and nicely structured, compositional and alternately super-free.

And these are some very together players, too. They do not flag but turn in great work.

It is a Mazurek triumph! So, what, would you expect me to tell you to buy it? Yes! Rob, the artists and the label deserve your support! And the music is excellent. Buy it. Go see them, too.