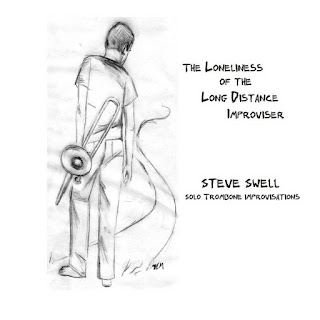 Steve Swell is in many ways the leading trombonist in modern avant jazz today. Sure there are others, good ones, but Steve has done more noteworthy music on the instrument in the last decades than anybody else I can think of. His playing reflects great attention to timbre and color, and he in his own way channels the trombone jazz tradition encompassing the early tailgaters, the big-band innovators, boppers and afterboppers, all of it, and gives it his own spin as an important stylist in his own right. As composer and bandleader he has excelled as well. I've covered a fair amount of his music on these pages and now it is time for another good one.

As seminal and all-pervasive an artist as he is, Swell nonetheless to my knowledge has never recorded an all-solo trombone album before. So it is timely that he has finely, finally done so--The Loneliness of the Long Distance Improviser (Swell Records SDS 001).

Last fall he went into a studio in Brooklyn and now we have it. Open horn, muted, sound-oriented, note-oriented, new music and jazz-rooted free improvisations leap forth at us in 15 short segments.

There is a spectrum of expressions that come into play; lots of good ideas and feelings go into the performance; all flows with the surety of a master improviser that he most certainly is. If it seems effortless it is because all the work and shedding that has gone into his music has taken place already, though nobody who continues to produce good things ever really stops that process.

There is a wealth of freely architectural building to be heard and experienced. Freedom is a word that expresses the music, but it is a freedom that has required a good deal of preparation, the structuring coming about while and after he spent years working on multiple sound models and spent considerable time interacting in group situations. You might compare his solo trombone work here with that of Stuart Dempster or George Lewis. You might find that he falls into a place somewhere between the two, but in any case there is soulfulness on display increasingly as the set proceeds, but there is also a new music conjoining of sound-color clusters, both in a virtuoso zone, both arriving at places it takes considerable musical abilities and ears to get to.

And that's where Steve is now. A master of the art of the trombone, going it solo for a set of adventurous and very musical results. Solo albums by individual avant artists can sometimes get boring, if things are not quite right for whatever reason. Loneliness is the opposite. It is vital expression, filled with immediacy and flourish, captivating trombone utterances.

Anyone who appreciates full-blown spontaneous excitement, a no-nonsense getting to it by a single naked instrument, a masterful example of the solo trombone at the hands of a brilliant exponent...here is an album for you! Kudos!