Grego Talks About His Album "Expansion" 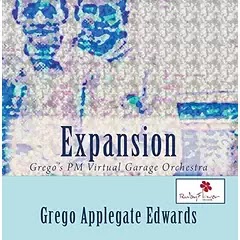 I would like to introduce my new album Expansion to you, in the hope that you might find it interesting. To start it is available on Amazon via the following link http://www.amazon.com/Expansion-Grego-Applegate-Edwards/dp/B01F9JW8H4/ref=sr_1_5?ie=UTF8&qid=1464888829&sr=8-5&keywords=grego+applegate+edwards. As usual my critical self "interviews" the artistic me in the dialog below. What follows is a little of what the album is about and why I did it.

Critical Grego: So you've got another album for us? It sounds familiar. Didn't you circulate some private CD-ROMs of this a few years ago?

Artistic Grego: Well, yes, most of the guts of the current album were initially mixed down and circulated privately a few years back. These were the first sessions and the first project I did with my fully decked-out studio. The digital work station allowed me for the first time to have essentially an infinite number of tracks to work with, and so I went a little mad with all the possibilities. Those first mixes in the end I was not completely satisfied with--I tried to do a little too much at points so I returned to the earlier mixes and came up with a different sequence and what I believe is a more coherent presentation of the myriad elements involved.

Critical Grego: So what is this music about? How did you come to make it?

Artistic Grego: It all started with some simple grooves I built up on hand percussion, then a riff. From there it took various forms, some of which I ultimately rejected. I tried in this newly mixed and mastered version to get closer to what I had originally planned. I suppose it all goes back to those early Miles electric classics and some of what was happening from time to time, especially on Bitches Brew and the original Live at the Fillmore release. That music gave us youngsters a new way to play freely, yet rockingly and how to build in space, like a space station. There are parts on those sides where the main solo is either secondary or a part of the totality and like a pianist would comp in bop-and-after jazz, many of the instruments (say as played by Airto, Jarrett, Corea and etc.) would create a pointillistic carpet of interlocking parts, multiple "comps," that went along with what, say, Miles was doing in his solo. Well everybody got something out of that idea then and Expansion in part is a return to the multiple comp tapestry only with a whole bunch of instruments--a virtual orchestra/big band, with multiple percussion, banjos, guitars, drums, gongs, vibes, santuur, bass, mandolin, glockenspiel, as so forth. I tried to push the idea to its extreme limits by doing things like adding a 50-guitar orchestra section but in the end I realized that there was a limit to what a digital soundstage of endless overdubs could present with realistic two-channel mixdowns. There is a point where it becomes increasingly difficult on a digital platform to create an infinite number of layers, which is often what I hear in my head. So a little compromise was necessary, to get the soundstaging audibly crisp enough, so to speak. So the Expansion as heard in three sections on the album gives you two windows on the orchestral free jazz-rockestra with different instruments embellishing the groove pointilistically and a middle section that is more free-electric orchestral, more Sun-Ra-meets-Varese-like, you might say.

Critical Grego: And there are some chant-like vocals. What is that about?

Artistic Grego: They are based on transcribed nonsense prose that was designed by a spammer to get past the simpler spam filters in use a while back. It was all about nothing, with absolutely no meaning, but surreal in the extreme for the random dada sense it all made. So I decided to build Expansion around a chanted version of meaninglessness, to kind of highlight how a to-hell-with-you segment of the population approaches the humanity of others, that how they only give a damn about getting to you and getting to sell you their fraudulent goods, on the net more than ever. It's a gesture of disgust, of the deterioration of language on the internet and the media at large and the increasingly questionable ethical world we occupy willy nilly nowadays.

Critical Grego: You are making a good deal of very densely textured musical things. Why don't you just hire an orchestra?

Artistic Grego: As it is maybe $5,000 went into the instruments and equipment that allowed me to do this, originally, luckily at a time when I had the money. And I've made a diner dinner's worth of that back. I've been in no financial shape to be able to pay people to do my music. Maybe that will be possible in the future. But as I see it I am getting the sound I imagined already, only because I have enough musical chops on a variety of axes to get what I was after. SO 200 years ago this might have been exceptionally tortuous solo piano music, because that is what poverty might have afforded me. The music is virtual (that is, multiple overdubs in real time) but the musical sounds are still there. I do look forward to interacting with other musicians in the future, to get a real-time organic interaction going, but for now this gives you the sound as I imagined it, as close to real-world performance as possible.

Critical Grego: So this is a three-movement Expansion to replace the original five-part version you first ended up with, and only a few people heard. But there are other cuts?

Artistic Grego: Yes, a soundscape, live to two-track for synth, and a hypnotic counter riff-out,  all to provide some contrast and breathing space.

Artistic Grego: Oh, I don't know. The old psychedelic-proto-prog crowd should find it both familiar and slightly strange, avant jazz fanciers who do not mind some electricity and rock elements, fans of Miles's original fusion bands, new music aficionados not afraid to consider a new mix of elements, maybe my mom if she were alive today, no maybe not, haha. Musical folks in general. Avant electricians. Naturally exploratory souls. Somebody looking for something different.

Critical Grego: Well thanks for giving us a little background. I find it all catchy enough that some folks would take to it, I think.

Artistic Grego: I do hope so. The music only makes sense to be heard and I hoped liked by a reasonable slice of ears out there. Thanks in advance to those that take the leap and hear what it is about.
Posted by Grego Applegate Edwards at 8:28 AM