Angles 9, Disappeared behind the sun 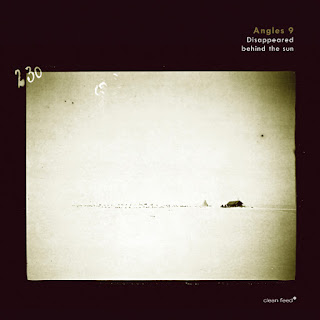 The band Angles 9 shows you immediately that they are taking no prisoners on their album Disappearance Behind the Sun (Clean Feed 405). Martin Kuchen, whose compositions for this nine-tet (a near big band) make for a most refreshing avant jazz offering, takes a tenor solo of a blazingly incandescent kind and then we jump right into the compositional essence of this music.

Martin is on alto and tenor, along with a very committed and effective group: Zethson on piano, Stahl on vibes, Broo on trumpet, Kajfes on cornet, Aleklint on trombone, Hegdal on baritone, Berthling on double bass, and Werlin on drums. The band has great character and plays the compositional elements with a zest and verve that bring the smoking fire of this music in full aural view. Collective improvisation, melodic abstractions and riff underpinning meld together for some wildly ecstatic jazz. Solos are peppered throughout in excellent ways. And as you listen you know that this is the music of right now, modern in its determination to go beyond, filled with soulful exuberance and downright lucid musical outbursts of brilliance.

Five compositions distinguish themselves with a band that steps forward to realize it all with a perfect zeal. Kuchen's music stands out rather unforgettably as a new something, related to what has gone before in the advanced avant echelons. Maybe you recognize a debt to George Russell in its layering of multiple lines and extroverted collectives and solos atop riffs. A debt but absolutely fresh and new for all that.

This is one hell of a set from a talented band and the sure compositional forms and substance of Martin Kuchen's enormous talent.

This album is just terrific and I cannot recommend it more highly. It points I hope to much more from Martin, for this is extraordinary!
Posted by Grego Applegate Edwards at 6:05 AM