Michael Pedicin, As it Should Be, Ballads 2 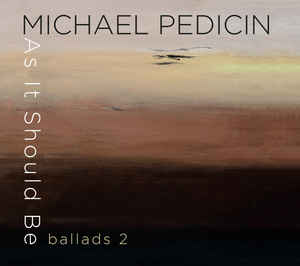 We have come some distance from the time in jazz where the ballad was a fixture (think for example early Miles, Coleman Hawkins) of a typical set by the most advanced of musicians. An entire album of ballads is a rare thing these days, and you certainly do not expect a ballad in a typical set by today's stalwarts. I do not, anyway.

So to me a new release of just ballads is unusual, more so than perhaps it used to be. Tenor-soprano Michael Pedicin is one of the exceptions, as he shows with a second volume of ballads: As it Should Be, Ballads 2 (Groundblue Records).

The album is nicely put together, with eight worthwhile compositions by Johnny Valentino (the guitarist here as well), plus "Bridge Over Troubled Waters" and Coltrane's "Crescent". Pedicin is out front with some very fine effusions on tenor and soprano. He is well seconded by Valentino on guitar and Frank Strauss on piano and Rhodes. The rhythm team has a subtle but swinging role. Mike Boone on bass, Justin Faulkner on drums and the well-known  Alex Acuna on percussion distinguish themselves with a proper backdrop for the pellucid and stirring solos.

It is one of those CDs that can be ear candy for the uninitiated yet have full artistic presence for the cultivated jazz listener.

Give this a spin!