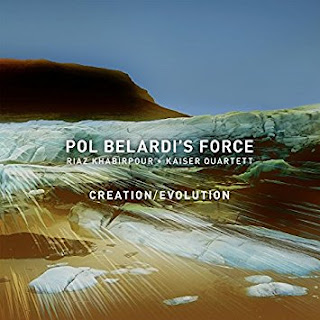 There is refreshing and ambitious artistry to be heard on Pol Belardi's Force and their album Creation/Evolution (Challenge Records Int. 71181).  The Force Quartet I gather is based in Germany. Pol Belardi's electric bass implacably puts the music on solid bedrock. The other quartet members play a central role in realizing Belardi's compositions and arrangements. David Fettmann on alto is energetic but not on the edge of energy playing. That happens to fit the unwinding musicality of line and harmony that Belardi favors. To call it post-Shorterian first occurred to me as I listened a final time while writing these lines. It is not wrong. There is a clarity and resonance you can feel in this music and though it does not strike me was being derivative of Shorter's writing, it does share with Shorter's compositions a kind of advanced melodic-harmonic matter-of-factness that is a good part of what makes this music in essence what it is. But there is more.

Back to the quartet. Jerone Klein on piano has a full musicality and backbones the music while nicely embellishing improvisatorily as called upon. And Neils Engel drums creatively and brings out the compositional and propulsive needs well.

For about half the pieces the quartet is joined by guitarist Riaz Khabirpour and he adds considerable musical texture and finesse. The Kaiser String Quartett also adds fullness and a distinctive compositional complexity and richness to the music on half the program. Pol manages to integrate both into the artistic whole in ways that feel organic and natural.

The sum of the musical results is very motivated by the compositions and how they lay out over time. There is an almost-classical logic to the unfolding of each piece, and a great deal of musical riches to explore and appreciate. It is not quite ECM-ish, not exactly neo-Third Stream, not exactly anything but Belardian. I do sometimes hear an affinity with that old 2LP Keith Jarrett album on Columbia years ago, especially in the string and guitar elements. And it turns out that is a very good thing, a very fulsomely musical thing, and expressive and slightly lyrical thing.
.
I would think anyone who likes the idea of a jazz composer-centric music will launch into the music positively. I do recommend it as a substantial offering, perhaps more modern contemporary than avant garde, but such distinctions are not important if the music is worthy. It is! Listen.