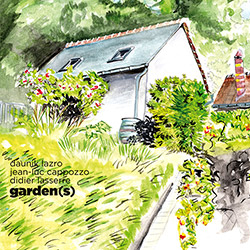 We drift along in time while new and worthy music can fill our ears and does if we take the time to listen to what is at hand. Today one such album offers itself up for consideration, namely Daunik Lazro, Jean-Luc Cappozzo and Didier Lasserre's Garden(s) (Ayler Records AYLCD-150).

It is a trio date from France that calls upon some standards and some free originals to suspend our everyday mundane concerns and catapult us into an ozone strata of improvisational futures laced with classics of past tenses spoken in the present-future tense.

There is a sort of oscillation between rethought classics and new ground. So we have Duke's "Sophisticated Lady," and the lesser-known "Hop Head,"  Coltrane's "Lonnie's Lament," Ayler's "Angels." They rub shoulders with the strictly new improvs that this trio so readily fabricates.

The results are moving, motional, never static. And in the end it is firmly a part of the jazz continuum, yet in itself an original statement. That's a very good thing. Listen and I think you will dig what you hear!

Posted by Grego Applegate Edwards at 7:40 AM