Grego Applegate Edwards Talks About His CD Pastoral Dream I 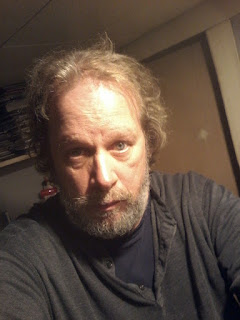 So hey it seems time once again to explain myself. What in tarnation am I doing and why? The answer is simple. I have no idea what I am doing! No, I am kidding. In the world today much of what we know is on a need-to-know basis. So why know what you do not NEED to know? Why anything? When I come on here and plug my new, 12th CD Pastoral Dream I, it is not out of a lusty desire for mountains of shiny lucre. Face it, making my music at this point is not going to make me rich.

What matters right now is the music on Pastoral Dream I. What is the narrative behind it? What is there musically and how do I see it? And why would you find it something you might consider as an addition to your music piles and your listening life? 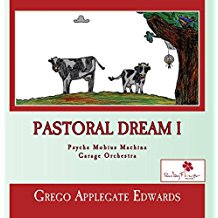 So What of It?
Really, so what? The music you hear on Pastoral Dream I (Ruby Flower CD) was put together over a number of years. It captures a fleeting dream mood that depicts the musical search for, love-making to and loss of a phantom ballerina that  took shape in my head when first listening to the old rock song "Pretty Ballerina."

Like Piaget's idea of the perception of infants, that an object  is only thought present when physically in front of him or her, the ballerina is here-gone in the dream, but the dreamer gradually believes she exists still, and searches for her continually over various pastoral landscapes.

The music is all virtual multiple me's occupying many tracks, instruments and subjected to studio  enchantments to make of it an orchestral whole. Volume Two will continue the journey and cover new ground. 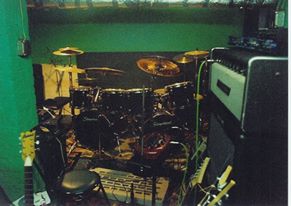 A Bit More on the Music
Just because the music exists alongside a programmatic concept does not mean that the music was put together solely to exemplify that. Some of it was fashioned before I had the idea, but in any event it makes present in sound the dreamy search. All of the music has a mood consistent with the story-idea of the search and the pastoral landscape. Yet it was conceived in purely musical terms, though in the back of my head I was thinking about the here-gone dream I have had for so many years.

The album begins with some evocative electro-acoustics and a couple of simple early studio history quartet jams that reflect the utter joy I felt playing the guitar again after a long pause. They are not technically astute in any way, but they are that joy as was the pastoral dream traversal and singular life search.

The last three numbers form the core of Volume One. As previously the Psyche Mobius Machina Garage Orchestra is an orchestra-sized collective gathering of an electric guitar section, a synth strings section, multiple keyboards appearing as themselves, bass guitars, a percussion section of drum set and other percussion, and a small "choir" at times, all put together layer-by-layer in my studio as I played all the instruments and sang the parts one-by-one.

"Holiday Flubber" begins the sequence with a somewhat mysterious orchestral new music improv. The entire unfolding is based on a first-take, thematically diverse keyboard improvisation, which then becomes the multi-dimensional root to the many part construction that makes up the whole that we hear. The acute absence of the ballerina is felt especially around the holidays and the by-product flubber that holiday celebrating makes present is a poor substitute indeed.

From there the central theme of "Pretty Ballerina" comes to the forefront in a slow and sultry orchestral blanket that has a rather orgasmic core. It is in the very expressive lyrical cosmic zone that seemed just right for the transformation made possible by the Garage Orchestra.

From there the definitive mix of "Paiute Gathering Pinenuts" gives a final climactic send-off for Volume One. Paiute Indian women gather pinenuts in the woodlands while the menfolk are off hunting game. Why are we here? They sing of that wonder as the ballerina is off someplace unseen. It is a sort of prog-minimalist psychedelic paean to life in nature, to a pastoral dreamtime that has its actual dimensions in a communion with the natural world. A cosmic drone rock anthem builds slowly and in the end the movements of the earth around the sun take over the aural plane of sound with a cosmic spinning of infectious (I hope) intensity. Oh, and so that spinning is the dance of the earth with the cosmos. It is also the spinning ballerina in her timeless dance in the realm of the spheres!


That Pretty Much Covers What I Want to Say
And that is what you can hear if you get the CD. Volume 2 will follow shortly and take up where the first volume leaves off, including a Four Seasons for King Oak and the Ballerina as a Young Girl. Meanwhile you can grab the first volume at Amazon now by following the link:

Thank you deeply if you take the effort to get this and listen!!  I hope you find your  psychic ballerina and that you too will dance. Am I surprised?  Always. I mean about anything that happens next.
Posted by Grego Applegate Edwards at 11:58 AM