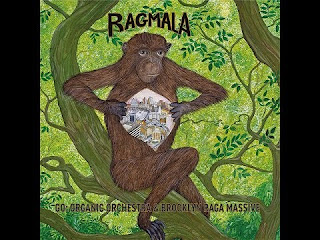 Where else might you hear a combination of Indian Classical influence, Prog-Fusion Quasi-Psychedelica, Gnawa, Prog-Funk post-Miles and a myriad of other things deftly put together as one. Certainly the concatenation of Adam Rudoph's Go: Organic Orchestra and the Brooklyn Raga Massive and their two-CD, three-LP Ragmala - A Garland of Ragas (Meta Records Meta/BRM 023) is a place where all such things happen together exceedingly well.

The album combines some 40 musicians including Gnawa's legendary Hassaan Hakmoun, Chicago's own Hamid Drake on drums/percussion, celebrated cornetist Graham Haynes, flautist Kaoru Watanabe along with the Go and Brooklyn ensembles.

Fused advance and Indian classical are the primary drivers one might say--for the roots of the two orchestras lie there, yet too this is not some "ordinary" fusion, for everyone brings specifics, never generics.

The two CDs have such a variable palette of goodies that I scarce know where to start, other than to say that rhythm is prominent and the drumming-percussion is irresistible. Yet then so are the parts that map out the written routines and their juxtapose with very viable improvisational points in time.

It is an album whose ambition is justified in excellent adventure, results that make you come back repeatedly to grow into the music world-fully well, at least in my case. It is invigorating grafting-hybridization that promises and delivers in ways we do not often get such measure of in the Progressive music-Avant sphere.

This is not music to rest on laurels. It expands in the best sense of what Fusion was meant to be in its inceptive years.

Hurrah for this one. Get it!
Posted by Grego Applegate Edwards at 4:04 AM