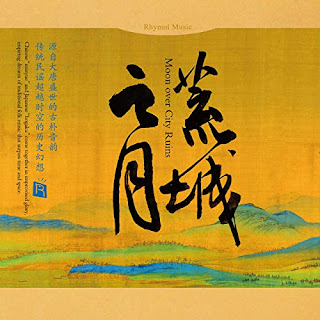 In Moon Over City Ruins (Rhymoi Music RMCD-0003) music producer Ye Yunchuan gathers together an ensemble of young and talented Japanese and Chinese musicians for a program of interceptions between Chinese and Japanese Traditional music by way of a program of Chinese Folk melodies and Japanese Hogaku music. Poetic, nicely unfolding interpretations and some well conceived improvisations frame the pieces along with shifting and varied instrumentations.

The music hearkens back to a historical period where there was an extremely fruitful cultural interchange between the Chinese Tang Dynasty (618-907) and the Japanese of the Asuka and Nara Epochs (538-794).

Instruments to be heard include shakuhachi flute, koto, guzheng, erhu, shamisen, biwa, and the taiko drum.

The album is epitomized by an interpretation of the timeless Japanese classic song "Moon Over City Ruins." Several old Chinese folk songs and additional Japanese classics from the period paint for us a rustic pre-modern landscape where the natural and human worlds existed in a kind of parallel juxtaposition that these ancient strains embody. The music speaks beautiful volumes of a time now long ago. The readings are inspired, surely, and in the music as a whole there is a magic that can still cast its spell on us and most certainly does on this album. Just listen to the arrangement/improvisation on the haunting "Sakura" that opens the program and doubtless you will feel yourself transported as I did.