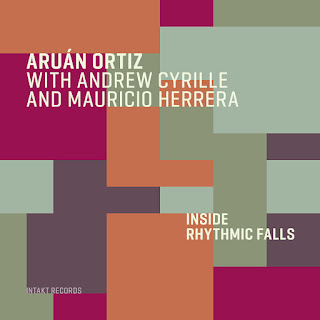 Cuban-born pianist Aruan Ortiz does something wonderful with his Afro-Cuban heritage, specifically the 19th century music called changui, a fusion of Spanish cancion and African Bantu percussion coming out of the sugar cane fields--along with the Haitian slave style known as tumba francesca. All that combines with Ortiz's poignant memories of the maelstrom of rhythmic music that rebounded and collided in the streets and byways as he grew up in Santiago de Cuba.

The results are in the beautifully done album Inside Rhythmic Falls (Intakt Records CD 339/2020), which channels all Ortiz's Cuban life input into a feeling of being literally knocked over by rhythm. The Afro-Cuban roots are "abstracted" into a Modernist musical world throughout.

The album centers on the Ortiz piano with the remarkably sprightly drumming these days of Andrew Cyrille and the very game hand drumming of Mauricio Herrera. There are a number of tracks that feature Afro-Cuban chant vocals by Aruan and Mauricio plus drums and/or hand percussion and these help set up both the homage to the roots and then also the very advanced piano, drums and percussion spots which follow--those being very free yet do keep in a sort of aesthetically cloaked way the root consciousness that overall marks this outing significantly. It is moving, subtle yet bristling with musical poetics.

This is plainly excellent music. All involved sound wondrous, especially Ortiz and his deft interactions with drum master Cyrille, but too also Herrera.

It is nothing if not completely internalized, organic, lucidly inherent yet modernistically transcendent. This is no mere flirtation with the past. It is much more and says musical reams about rooted respect amidst a determined moving forward.

A fabulous record. One of the best of its kind. Viva!
Posted by Grego Applegate Edwards at 9:33 AM