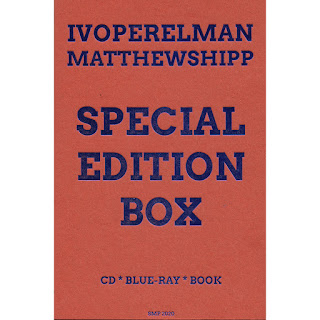 Over the past decade the various duet recordings between Ivo Perelman (tenor sax) and Matthew Shipp (piano) have unquestionably been some of the most advanced and together new Jazz-Free recordings of our time, a duet for the ages. Happily they continue to play together. Most rewardingly there is a Special Edition Box (SMP Records 2020) with more excellent music from the two.

The box contains a studio CD of the duet entitled Procedural Language, a Blu-Ray of the duo Live in Sao Paulo at SESC, a video capturing them at said event on July 11, 2019. Then there is an informative booklet, Embrace of Souls by Jean-Michel Van Schouwburg.

I no longer have the capability to view Blu-Ray disks on any of my devices so I was not able to watch the DVD. I am sure it is worthy but I have not been able to check it out.

The booklet has an appreciation and chronology that puts the music in perspective, followed by an annotated discography of interest to any collector-enthusiast.

The whole package is quite handsome but it is the CD Procedural Language that grabs my attention especially and attracts my ears with each listen. There are twelve improvisational segments for Ivo's tenor and Matt's piano, every one a significant improvisational utterance, freely articulate and ever filled with a Jazz joyfulness. Ivo testifies, declares, while Matt responds with free structuring towers of pianism that beautifully open up the moment with great ideas that spur Ivo on all the more.

It is some of the most remarkable of their duets, which is saying a lot since we have been blessed with some real gem sessions from the two in the last five years. Tumbling, driving, contemplating, exclaiming, decrying, balladizing, harmo-melodic stratosphering, they spontaneously travel the musical spaceways in ways that ring true always. If you need rejuvenation (and nowadays who doesn't?) this music appears as an oasis in sometimes an all-too-arid wasteland of the everyday. Here are Ivo and Matt in the full maturity of where they are right now, savoring each moment of music filling the air, letting the interlocking ideas flow unhindered. for optimum constancy of "telling it."