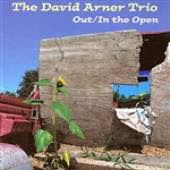 Pianist David Arner is a musical voice that does not fit easily into the various schools of improvisation that are widely influential among the free school of players. He's managed to forge a path that does not cross directly the Cecil Taylors, the Paul Bleys, the Keith Jarretts, or the Bill Evans influenced players. Not that he has ignored these stylistic landmarks. Clearly not. But he chooses to go his own way.

You can hear that quite readily in the 2007 recording Out/In the Open (Not Two 812-2). It's a trio date with the formidable alliance of Arner with bassist Michael Bisio and drummer Jay Rosen, all key institutional-foundational figures in the creative improvisational music of the present era. The album's hour-long program features four collective improvisations, an Arner composition ("Intensities") and a standard ("My Romance").

There is remarkable piano trio interplay throughout. Rosen listens creatively to what Maestros Bisio and Arner are doing and gives out with the coloristic energy washes that he does so well; Bisio is alive with noteful counter improvisations to Arner's forward-pressing expressions; and David unleashes the full spectrum of the music he hears, which engages the jazz tradition, the expressive intensities of the avant, the expanded harmonic, melodic and textural potentialities of the piano and the musical ideas he has in abundance.

It's a documentary testament to what these three imaginative players can achieve in the space of a single session. And it's a sterling example of Arner pianism at its best.

Highly recommended.
Posted by Grego Applegate Edwards at 5:09 AM