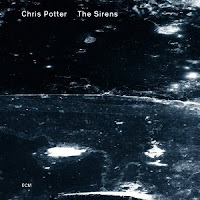 It was sometime in the middle-'90s when I first heard tenor-bass clarinetist-soprano saxist Chris Potter. I had recently been over at the Village Vanguard interviewing Lorraine Gordon and it got me in the mood to go back and hear some music. I had never heard of Chris Potter at that point, so I figured "why not somebody new"? He was in great form that night, playing some very beautiful ballads and swinging up a storm. Scott Colley was on bass and he punched the group forward with a percussive attack that made it all come together. I went home satisfied and satiated with good sounds.

A few years went by, Chris joined Dave Holland's exceptional band, 9-11 destroyed my airline city guide career, but I had checked out the many Potter albums that were out by then and was happy to hear them.

Flash forward to today. Chris Potter has made a successful go of his own group and ECM has released his latest, The Sirens (ECM B0017932-02).

It's Chris with Craig Taborn making a good showing on piano, David Virelles adding the exotica of prepared piano, celeste and harmonium, Larry Grenadier on contrabass and Eric Harland, drums.

The Sirens gives Chris a chance to stretch out with fairly long and convincing solos and also show his latest compositional-conceptual frameworks.

He has gone into a not quite straight-ahead, contemporary zone that is part post-Trane, part post-post and shows an evolution from the Holland group sound. You'll hear excursions into what you might call new music-ethnos territory, plus some more beautiful balladeering and commanding stopovers in straight-eight territory.

Virelles's prepared piano in tandem with Taborn's piano gets some interesting play here and it extends the music.

Everybody does something key in the overall context. Chris shows why he is a top tenor today, with a sound that is becoming more and more personal, his compositions ambitious, a new ECM sound if you will.