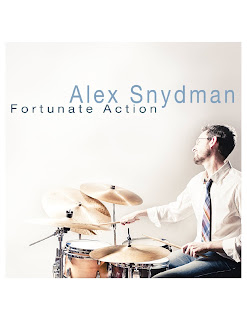 Alex Snydman is that most unusual of musical beings, someone who switched from one principal instrument to another rather late in the game. Namely in 2003 while a college senior he made the switch from guitar to drums. And he's been playing them ever since. Judging from his album as leader, Fortunate Action (self-released), the move was most certainly the right one. He is a drummer of excellent finesse, capable of all shades of power and push, a timekeeper with great inventive capabilities which he brings to bear throughout the album.

These are mostly piano trios with the addition of Carl Clements on tenor and soprano for two cuts. For the rest Alex has opted to feature three pianists alternatingly, players he has had significant experience interacting with. They are Chris Pattishall, Doug Abrams and Miro Sprague. The bass slot is ably occupied by Alec Derian for all but two pieces, when Tyler Heydolph takes over.

This is intricate contemporary piano trio music that starts with a later Evans Trio sensitivity to interplay and builds upon that. None of the three pianists especially sound like Evans except in their harmonic sophistication; they are moving toward what they personally hear. They all sound good, as do the bass players. The main bulk of the compositions are by the various pianists and Snydman and they are worthy. Then there are a few classics like the Ellington-Strayhorn's "Star-Crossed Lovers" and Herbie Hancock's "Tell Me A Bedtime Story."

It's all so musical yet Snydman's drums are so important a component to the proceedings that you don't especially feel like you are listening to a "drummer's album," and I don't mean that in some pejorative sense (either way) but rather that this is an excellent set of piano trio/quartet sides.

And as you listen through a few times, everything hangs together so well you feel "fortunate" to be present for this "action," very much so. Recommended.