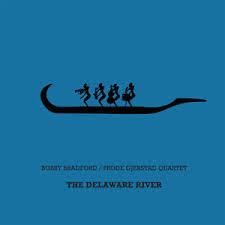 On the docket today is a very together recording of the Bobby Bradford / Frode Gjerstad Quartet live in Philadelphia called The Delaware River (No Business NBLP 87). The quartet includes Bobby Bradford on cornet, Frode Gjerstad on alto sax and Bb clarinet, Ingebrigt Håker Flaten on bass, and Frank Rosaly on drums. which not surprisingly is a very game proposition.

In the tradition of No Business's keen appreciation for the avant jazz music scene, this is a first-rate window onto the quartet's world that night in March of 2014. The rhythm section is, as you'd expect, completely focused on the music at hand, giving the front line a very creative wash of free momentum that Bobby and Frode draw from as a catalyst. For anyone who knows the work of Bradford and Gjerstad, it will come as no surprise that the two are well suited to work together. Frode has held his own for years as a very important reed presence in free jazz Europe and of course Bobby Bradford is a legend in the US for his association with Ornette Coleman and his partnership with the late John Carter in a landmark quartet.

But of course no one can be sure of what an outcome might turn out as until the hearing. This set is a confirmation of the rightness of this quartet, of the continued creative excellence of Bobby Bradford, the equally inventive Frode Gjerstad in a non-compromising "new thing" world, and the righteous chemistry of the quartet as a full-bloomed entity.

This is music with space for all. Bradford and Gjerstad get some remarkable interplay together with their simultaneous two-way soloing, each clearly hearing one another and responding with parallel ideas. Their space openings for the rhythm team are judicious as well. Ingebrigt and Frank are two of the liveliest artists in their own right these days and they know how to extend the music accordingly with good ideas and open support as well as independance.

So as the Delaware River flows so does this quartet. It is not a floodtide of histrionics nor is it in a drought condition of narrow trickling. This is the quartet like the river in steady-state continuity. And so the program gives us a fascinating earful of these four in productive and fruitful togetherness.

It is a nice addition to the discography of all four artists. It satisfies. I am clapping enthusiastically with these words. Listen to this one.