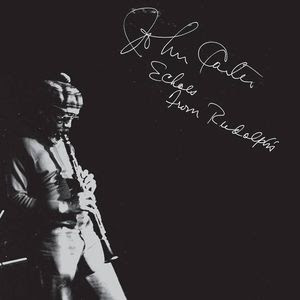 I was introduced to the music of clarinetist John Carter, as many of us were, via several excellent albums featuring himself and Bobby Bradford in a quartet. They were thoroughgoingly advanced and most unequivocally themselves. Later John went on his own with solo and group efforts that gave us an even deeper appreciation of his special world.

There was a trio album Echoes from Rudolph's that came out on an Ibedon LP that was especially fine. It has become quite rare these days, but No Business has come to a rescue with a CD reissue of the 1977 album and a full CD's worth of unreleased tracks from the sessions that produced the album--resulting in a new two-CD set (No Business NBCD 80-81).

It is John on clarinet and soprano, Stanley Carter on bass and William Jeffrey on drums doing a program of Carter compositions and giving us an excellent free-wheeling experience.

The level of music does not at all lag on the second CD of unreleased tracks. It is more state-of-the-art music from the band.

Stanley Carter and William Jeffrey are very much in form and equal to the challenge of playing with John Carter at a peak. They burst forward with a rolling, tumbling excellence that is fascinating and worthwhile in itself. But then John sounds just fabulous on both clarinet AND soprano here, reminding us of how beautiful a player he was, how original, how soulful and creative.

Anyone who has not spent much time with the late Carter's music needs to do so. This album set is an excellent place to start. And of course those who know John's music will want to get a hold of this set, too. He was one of the most important stylists on clarinet in the flowering of the avant garde (along with Perry Robinson). Echoes from Rudolph's provides you with a generous amount of his music in peak form.

Get it if you can!