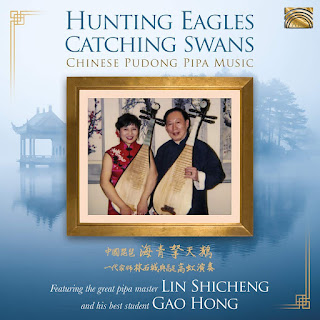 Perhaps the happiest lifelong music listener is one who is not afraid to let the listening being get ahead of the conscious deliberating mind. In this way one's musical being can travel unhindered to previously unexperienced musical places and commune with new sounds, only later then to engage that music on a more deliberate and conscious level, perhaps. Whether this is something psychically universal or not could no doubt be debated. It is for me anyway a path I continue to travel in my own musically experiential way. Without that exploratory urge one must resign the self to limitations that inevitably hold one back. This I know.

So in the musical repertoire for the Chinese stringed instrument called the pipa I have progressed some ways into the excellence of it without knowing beforehand exactly where I was going. As a great example take the album before me this morning. Hunting Eagles, Catching Swans, Chinese Pudong Pipa Music (ARC Music EUCD2928). It features pipa master Lin Shicheng and as the cover states "his best student" Gao Hong.

Readers of this blog page may remember Gao Hong as the pipa master who collaborated very nicely with oud master Issam Rafea on the wonderful duet album From Our World to Yours (see the June 19, 2020 posting for my discussion of that one).

The album at hand was recorded some short time after the 1996 US Tour by Shicheng and Hong--and consists of pieces they performed together while the tour was in progress. It was a culmination of a most fruitful and productive master-pupil experience. At the same time it was among the very last albums made by Lin Shicheng (1922-2005) and so a testament to his full blossoming and creative fulfillment. And most importantly it is a marvelous example of the interplay of two pipa virtuosi of the highest caliber, with Shicheng and Gao Hong  in perfect synchrony, giving forth with a tremendously vital dual artistry.

Over the course of the program we hear some ten works that fill us with the beauty of the Pudong pipa style--in turn intricate, dynamic, explosive and deeply contemplative. They at times alternate, taking turns unveiling the particulars of this rich musical fare. The very last work, "Moonlight Over the  Spring River" features a duet of Ms. Hong on the stringed zhongman and Lin Shicheng on pipa. It is a fascinating example of Chinese traditional chamber sounds, something to hear repeatedly, as is the entire album, filled with subtlety and drama, some of the strongest traditions of world string playing at its very best. The pipa duets, two of them, are especially excellent listening but then so are the solo works played alternately by the two artists. There is tensile strength and astounding depth of artistry to be heard on this album.

If you know traditional Chinese pipa music this will give you a wonderful addition to what you have. If it is something new it will open up a wonderful world of musical sound. Either way it is well worth your time. Excellent! Highly recommended.

Posted by Grego Applegate Edwards at 8:16 AM