The JCA Orchestra, Live at the BPC 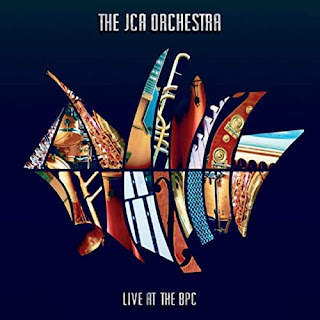 When I went to Berklee College of Music there was no Performance Center. But then Hendrix was only recently dead, and Coltrane was still around only a short four years before. So that was a while back. In any case I am glad Berklee now has a performance venue. otherwise for one thing there would not be this album by the JCA Orchestra (Jazz Composers Alliance Orchestra), or not at any rate one called Live at the BPC (JCA Recordings 1805). And that would have been a pity, for it is well worth hearing.

This is apparently their 11th album. I've missed a few but have appreciated them nearly from the first. They are in great form here and feature six compositions by four members.

For various reasons I am most familiar with the scores of Darrell Katz. So I perked up when I saw he had contributed one to the program. The 20-minute "A Wallflower in the Amazon" is a strongly rich palette of ensemble writing with a brilliant vocal and band sequence featuring singer Rebecca Shrimpton,  based on the poetry of Paula Tatarunis--and in this new version (it was originally on album 10) adding nicely the "Strings Theory Trio" of Junko Fujiwara, Mimi Rabson and Helen Sherrah-Davies, on cello (Junko) and five-string violins (Mimi and Helen). Well done!

Mimi Rabson's "Super Eyes - Private Heroes." swings beautifully and has a breathtaking bouquet of unfolding harmonic-melodic lines and some contrapuntal movement also, all of which sets up the soloists in a grand manner. It takes as its inspiration the Spy-Crime music of classic James Bond movies and the like. It stands out nicely.

To backtrack to the first cut, Mimi's opener "Romanople" has a pronounced ethnic feel, understandably since it leads with a Turkish odd-metered folksong like ditty. It all is a kind of musical-historical  retelling of when the Roman Empire had twin capitals in Rome and Constantinople. So the folksong gets extended treatment--as what it might have been around Constantinople, then migrates to Rome as a brass band styled section, then gets embroiled in the Roman military war machine. It retains interest throughout by nicely scored variations. Bravo!

David Harris "The Latest" brightly moves forward with a kind of post-Afro-Bossa flourish. There's a nice electric guitar solo too by Norm Zocher. It is an imagination of McCoy Tyner's "Fly with the Wind" band on tour, something they might have played.

Bob Pilkington's "The Sixth Snake" gives us a kind of pastoral quasi-balladic, highly inventive interlude with well crafted part writing. It is based on the number series 27563. It segues into a rock-funk openness and room for some nice trombone from the composer among other soloists who also do nicely (Maxim Lubinsky on piano, Lihi Haruvi on soprano).

For a definite change of pace there is David Harris' "Orange, Yellow, Blue," which uses Butch Morris' idea of the conduction and a combination of some written segments and improvisations cued especially for the moment to make up a free wheeling outer exploration that moves along and finds a groove in time.  Good show.

So that's the size of it. Live at the BPC presents a winning program of state-of-the-art contemporary big-band Jazz composition and reminds us just how varied and interesting that sort of thing can be. Highly recommended.

Posted by Grego Applegate Edwards at 8:58 AM