Scott Lee, Through the Mangrove Tunnels 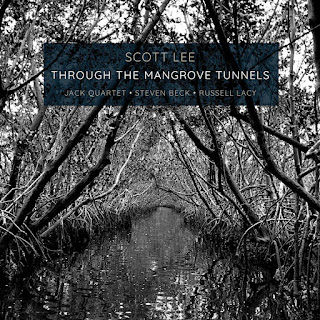 By the time that Rock began intertwining seriously with Jazz and New Music Classical as a three-way meld, the term "Third Stream" to describe Jazz and Classical combinations was somewhat on the wane. But the various possibilities of two- and three-way amalgamations continued to develop through to today. Frank Zappa was a foundational pioneer and a brilliant practitioner of the three-fold possibility and of course there were others. Fast forward to the present and a new release worth considering.

So what, then, about today's music, a CD of a long Scott Lee composition entitled Through the Mangrove Tunnels (Panoramic Recordings  PAN20)? It comprises the title work of eight movements featuring a premier New Music string ensemble--the Jack Quartet, plus pianist Steven Beck and Russell Lacy on the drum set.

The all-acoustic ensemble functions as a "group" in the Jazz and Rock sense--they perform mostly together with the drums playing a Rock or Jazz-Rock beat as the foundation with piano and string quartet there to play out the primary composed parts that deliberately contrast and alternately conjoin with the drums for a continuingly fascinating blend.

Through the Mangrove Tunnels flows together in its eight-part sequence to illustrate in music the experiential and historical flow of things in the swamps and bayous of Florida where the composer grew up.

The ensemble engages rhythmically in ways that combine New Music Classical abstractions along with figures that suggest Rock and sometimes Jazz phrasings. Melodically and harmonically there are at times suggestions of relatedness to Jazz-Rock but nearly always while referencing New Music elements.

Sometimes harmonically and rhythmically there are more direct Rock-Pop referencing in the strings and piano, for example on "The Ballad of Willie Cole." which goes its way without drums. "Playthings of Dance" gives out with a kind of old school pop-jazz theme that then expands outward into Modern territory before returning as a kind of "Sweet Band" gush. It is unexpected and amusing to boot. "Engine Trouble" for quartet alone has definite rhythmic bite to it.

The music consistently stimulates and retains its refreshing originality throughout. I highly recommended this one for all who like to explore the possibilities of genre gap spanning. Bravo!

Posted by Grego Applegate Edwards at 9:53 AM