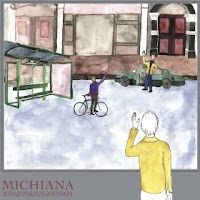 As much as there are ever multiplying performances of new jazz from solo instruments to quartets and the largest ensembles, the music does not stand still. Like with its cousin "classical" music, every type of grouping develops a body of music and performers that carve out a vocabulary/vocabularies in a never-ending series of works and cross-fertilizations. Classical music has its string quartet, for example; avant jazz has the unaccompanied sax performance.

And so we turn today to the latter in the solo baritone sax CD of Jonah Parzen-Johnson, Michiana (Primary PR 005). I do not know very much about Parzen-Johnson save that he appears to be Philadelphia-based. The music is another issue altogether.

Michiana takes some time to absorb. There is for much of the performance time a long and winding melodic presentation in a kind of easy lope. At first hearing it seems almost random; subsequent hearings bring out a connectedness you may not hear at first. There's a little of Roscoe Mitchell in that, but mostly in occasional phrasings that have a certain irony, a humorously direct way.

Jonah gets a rich multi-toned depth to his bari sound, with overtones and multiphonics combining with the more pure tones in ways that expand the music gradually and effectively. Eventually a rather rapidly deployed riff enters the picture and Jonah solos/comments overtop it after a time via digital delay.

The final two pieces use multi-layering for a larger, electronically altered sound, one a soundscape, the other an out-funk fragment. Both work off of motifs developed in the earlier sections and both serve to cap off the CD with directions proposed in a tantalizing post-ludian sort of way.

This is an original foray into solo territory. It manages to be thematically significant as it is also spontaneous and sonically diverse. It may not be for everybody but should be heard by anyone interested in the unaccompanied saxophone improvisation as an art form.