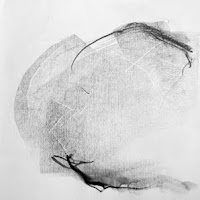 Sylvain Guerineau (tenor), Didier Lasserre (drums) and Jean Rougier (bass) have done something on their album Ligne (Improvising Beings ib12) that isn't done too much these days: make a free-avant jazz album in a ballad mode. Of course Paul Bley did some masterful examples long ago, and Ayler and Shepp could be devastating in this mode, but lately there hasn't been that much, has there?

And of course the bare fact that these three players have done it wouldn't matter if they didn't come through with some invigorating improvisations. But they do.

The three are not well-known in the States. Perhaps this will help. Sylvain Guerineau is much the star of this session. He has ideas, a lithe, slinky approach and a rich tone that goes well with the music. Lasserre and Rougier add much in the three-way dialog that continues throughout. But Sylvain stands out as the lead voice most of the time.

It's an album you might not expect coming out on the Improvising Beings label. But then the label is showing itself to take a refreshing "why not?" stance on what releases I've heard of theirs so far. So unexpected is not completely unexpected.

This is very listenable, very enjoyable trio music. Check it out.

Posted by Grego Applegate Edwards at 7:17 AM