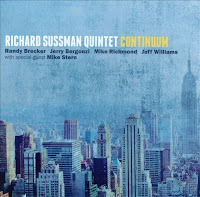 What is mainstream jazz today? Well not Zoot and Al. It's absorbed that. It's absorbed what Trane and Miles were doing. It has listened to Jarrett, Metheny, Hancock, and what's been going on in general and does something with it. It has a lot of hard bop roots. It swings. And the soloists, if it's done right, take a tradition and extend it in personal ways.

They do what they do, and they do it well, of course. The compositions give it a kind of substance that goes beyond a blowing date and into an original contribution.

Now if they would take it out a little...well they do a hair now and again...but no that's not really what this is. It's very good though.