Ezra Weiss, Our Path to This Moment 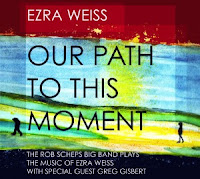 So when a good project comes along we should try and patronize it all we can. Such a good thing is at hand with the Rob Scheps Big Band playing the music of Ezra Weiss, on a CD entitled Our Path to This Moment (Roark Records).

This is a fully decked-out organization, with good players, soloists and rehearsal time well spent. Ezra Weiss' charts have very modern mainstream depth. His charts sometimes remind just a little of Kenny Wheeler's venture into large ensemble territory. There is a bright, full sound in the horns with distinctive voicings that project nicely.

The originals have weight, the rearrangements of "It's You or No One" and the folk strain "Wayfaring Stranger" show imagination and creativity.

In a word, "worthwhile."

Posted by Grego Applegate Edwards at 7:16 AM