Josh Berman and His Gang, There Now 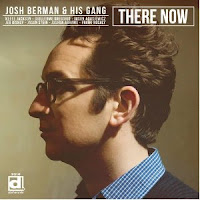 Cornetist Josh Berman gets good ideas. Then he does something good with them. For There Now (Delmark 2016) he's gathered together some of his heaviest Chicago running buddies: Jeb Bishop, Guillermo Gregorio, Jason Stein, Keefe Jackson, Jason Adasiewicz, Joshua Abrams and Frank Rosaly...then gone and rethought some classic Chicago jazz and built some new pieces around those re-thinks.

So we have tunes mostly associated with Austin High Gang members, especially some Eddie Condon recordings from the late twenties, and new Berman pieces. All take on the possibilities of the old meeting the free-out-arranged music that Berman and his cohorts favor.

The result is music that rollicks, rolls, and generally exuberates musical joy of a most extroverted sort. The old-new conjunction works well with the caliber of players here and the arrangements are loose and conducive of collective and individual excellence.

Check out their versions of "Sugar," "Jada" and "I've Found A New Baby" and you'll hear all kinds of elements in play, an out soulfulness that makes "avant old" make perfectly good sense.

It's a damned fine album. One of the best of the year, I think. You should hear it.