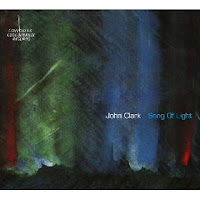 John Clark, master French hornist, sideman with such titan outfits as the big bands of Carla Bley, Gil Evans, McCoy Tyner and Charlie Mingus, did an album of his own in 1978. I am sad to say I missed it that time around but glad to say I am catching it as a new reissue. Song of Light is available again as a CD on Composers Concordance (009).

It's John on (sometimes multi-dubbed) French horn, Michael Cochrane on piano, Ron McClure on bass and Victor Lewis on drums.

Clark and company attack seven of his compositions, which turns out have some definite bite and substance to them (he studied with George Russell as a student). They are in a kind of funk-rock zone especially current at the time, but the melodic-harmonic architecture Clark builds around the beat is significant and worthwhile and of course his horn playing is exemplary as well as soulful.

It's a good listen, even after all these years.