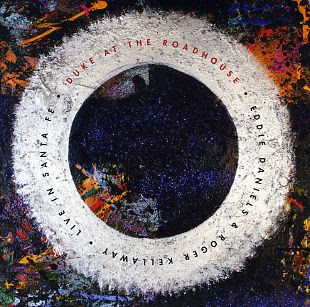 When things are clicking in jazz-improv- isation-land one always prays that "the tapes are rolling." That was most fortunately the case when Eddie Daniels and Roger Kellaway did a concert at the Lensic Theater in Santa Fe. Duke at the Roadhouse (IPO 1024) captures it in fine fidelity. It's in a way a reminiscence of when clarinetist/tenor saxist Eddie Daniels was graced with the unforgettable opportunity to sit in with Duke Ellington at the piano in a small club when Eddie first made his mark in New York. But it's more than that. Sure it consists of Duke compositions, "Perdido" by Tizol and an Eddie original that gives the CD its title. While they pay the compositions the super respect they deserve, they are arranged in a modern way for Eddie plus Roger Kellaway with his inimitable way on piano and, most of the time, some terrific cello from James Holland.

Any Duke fanatic like me will remember the sides Duke recorded with Oscar Pettiford on cello (along with Strayhorn) so the cello is no afterthought.

What makes this disk a standout is the piquancy and freshness of the arrangements. But the inspired improvisations coming through that night, most especially Daniel's clarinet and Kellaway's piano, are also exactly to the point. They are marvelously energized. I don't think I've heard either quite so relaxed and lucid. Holland's cello adds very much and there are some rare moments for Eddie on tenor.

In the end this is one bang-up set. Duke, swing tradition and the "ever after" of these artists at a peak make for pure pleasure!! Do not miss it. If it sounds like you'd like it, I can't imagine you wouldn't.