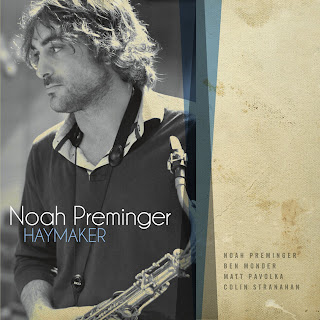 Noah Preminger comes at us with his third release, Haymaker (Palmetto 2163) and with it he shows us some more of his modern roots. We have a quartet here: Preminger on tenor, Ben Monder on electric guitar, Matt Pavolka on acoustic bass, and Colin Stranahan on the drums. There are mostly originals, by Preminger and one by Monder in an advanced contemporary vein. They are very good.

As I listened over time to this one I was once again impressed with Preminger's poise and sureness. He plays! And it also hit me that this band, whether they intended it or not, at least on this disk show heavily the influence of and pay a kind of tribute to the Paul Motian trio with Joe Lovano and Bill Frisell. There is a loosely swinging in-and-out quality here like that trio and the Preminger-Monder interactions show also a tonal-harmonic based spaciness of a sort that certainly the Motian trio carved out for themselves at times.

Well and so that isn't to say that these are carbon copies (a very dated metaphor alas), cc's of the original threesome. There is much very good music to hear and some strong original touches too. Preminger is extraordinarily lucid and has his own sense of what and when to play, though more and more I hear that Lovano-Bergonzi-Garzone zone in him, a Bostonian vibe if you will. He's young though and working his way to his very own rip of things. Monder is very good too and makes this group sound as it does in large measure. The rhythm team Pavolka and Stranahan have finesse and push to get this all moving.

You have to start somewhere with your music and at album three Noah has gotten off to an auspicious start. We will no doubt, most of us, be listening closely and eagerly to see where it all goes in the years to come. Meanwhile Haymaker gives us a very nice ride and bears close scrutiny well.