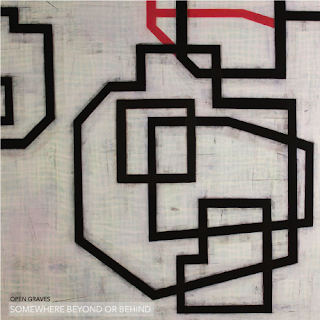 Where are we going? Can anyone tell you? I allude to an "old" song by Tony Williams Lifetime but it applies today as it did then. One answer is contained in the music of group-duo Open Graves. Perhaps that is not a name designed to charm average folks, but their music is far-from-average so there is complementarity there.

Open Graves is Jesse Olsen Bay and Paul Kikuchi. On their recent EP Somewhere Beyond or Behind (Prefecture 007), available in a limited edition of 150 CDs, they extend their uncanny exploration of aural ambiances. For this one Jesse mans various metal percussion and "broken and acoustic guitars." Paul gets on metal percussion as well, along with prepared piano and a drum set.

As with previous releases by the unit and by Paul with other configurations, this is some of the most aurally evocative music you can hear today. It's composed-improvised in ways that have an almost ritual unfolding. Imagine the music of Morton Feldman and some of Alvin Curran's installations and/or sound poems. A similar attention to space is operative, in its own way. So those two innovators come to mind as I listen to Open Graves music, especially this EP. Like with those artists there is a richly moody-cosmic sound world at hand, not dense or boisterous, but spaced in exotically inventive ways. Sound color is at a saturation point, wonderfully so...and originally so.

Get this one for starters. I think they are doing something fundamental, new and exciting.

By a more-or-less total coincidence I post on Paul Kikuchi's birthday, June 7th, so let's all wish him a happy one!