Chris Kelsey & What I Say, The Electric Miles Project 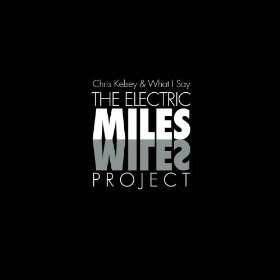 I think by now it is safe to say that Miles Davis' music from the Bitches Brew (1969) period through until his several-years-long retirement (1975-1979) was some of the most startling, seminal work he ever did. There are those who still cannot accept it as valid, which tells you how revolutionary it was and still is. There was (as most know) for a period certain critics and musicians who found themselves listened to, because they had gained a certain amount of momentum and creedence for various reasons. They launched an all-out attack on this music and on those that followed in its footsteps stylistically. Looking back now we (some of us) fully see how destructive that rhetoric was for the music and how the attempt can now officially be said to have been a disastrous failure . . . as bad-spirited as the mouldy fig reaction to bebop in earlier years but for a time much more devastatingly effective in squelching an entire school-period of improvisatory music. The music has not died. It is back in all vigor if you look for it.

And so we see the electric-out music Miles spawned resurging again. A very excellent example just came out: Chris Kelsey & What I Say and their Electric Miles Project (self-released CD).

Like Yo Miles and several other similar projects, the band jams-improvises on some of the cornerstone things Miles did in that period and then gets a little of their own jamming music out there too. As far as the actual tunes, these are not that often heard on the tributary rounds. "Agartha," "Directions," "Ife" and "Sivad" most certainly still have plenty of improvisatory life in them, as played by the quintet here.

The fulcrum point on this kind of electricity is the rhythm team. What I Say achieves musical liftoff via the strengths of Dean Sharp on drums and Joe Gallant on electric bass. The bass anchorage Miles made a point of leveraging came out of the soul-funk-rock riffing in the air and it became equally key for most of the electric Davis aggregations then. Gallant gives us his solid version of it with a slightly fuller tone that in part stems from using a six-string. Dean Sharp to his credit manages to do something in the drum role that does not sound like a direct DeJohnette-Foster recreation. And what he does works just as well for propulsion but helps define the band as its own entity.

And for that matter the same can be said for the dual electric guitars of Rolf Sturm and Jack DeSalvo. They are in the zone without copycatting in the least. They have big ears, chops, and creativity to fill out the electric-harmonic-line-weaving function as defined originally by McLaughlin, Lucas and Cosey in those bands.

Throughout the key element that makes all of this exceptionally good is the soprano sax of Chris Kelsey. He is a monster, as many already know, and he applies that monstrously fulfilling ability to this music without in any way losing the creative torque he has as a master improviser. There of course were some seminally monstrous saxophonists going through Miles' bands then, from Shorter, Grossman and Bartz to Liebman and Fortune, but Kelsey sounds like none of them. He is himself and it's a great thing indeed.

So yes, by all means check this one out. It's one of the best Miles electric tribute remakes out there. I hope they can do some touring and continue the momentum this CD most definitely sets in motion.

Posted by Grego Applegate Edwards at 7:27 AM