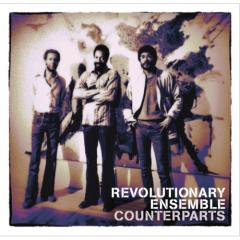 The Revolutionary Ensemble were one of those trios in the new jazz that achieved critical and artistic recognition but never quite broke through to the general public. Not exactly surprising since most of the important free improv groups remained at the time, at least in the States, with a solid underground following but without the extensive recognition that someone like Marsalis or some of the earlier household names managed to garner.

Their first tenure as a group ended in 1977 with violinist Leroy Jenkins, bassist Sirone and drummer Jerome Cooper going their own ways. We join them for a live appearance as part of their reunion in 2005, at the Teatro Gustavo Modena, Genoa. The album Counterparts (Mutablemusic) reproduces in excellent sound the music played that day.

There is a maturity to the trio you can hear on this recording. The music lays out a bit more deliberately, with each piece setting out well-defined roles for each player. The fire is still there yet there is a more deliberate balance. Like one of Jerome Cooper's drum solos there is structure and development within freedom.

Everyone sounds great. They achieve an almost classical parity really quite rarified, no doubt having to do with the many years spent together sounding out their collective edges as well as their collective middle. And within themselves too, they seem to have found a center worked out of years of making music and becoming.

There is a poise, fabulous to hear. Recommended.