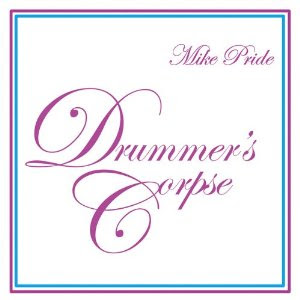 Some music is so powerful that there should be a caution- ary label on it, some- thing like, "do not play if you are driving machinery, always eat something before playing," or something similar! Mike Pride Drummer's Corpse (AUM Fidelity 078) is one of those. Now mind you I am not saying that's bad. Any of you who read my posts know that there is a very big place in my musical life for powerfully out music. And this one is one of the more powerful and out disks I've heard so far this year.

It's divided into two works. The first, the title piece, goes for a little more than a half-hour. Mike conceived and composed the piece after a devastating fire destroyed most of his earthly possessions--including recordings, compositions and instruments. In time it became Pride's personal Howl against war, greed, oppression. It's Mike on drums with six world-class fellow-drummers (Sorey, Smith, Previtte, McLellan, Greenberg, Canfield), Chris Welcome on electric guitar, Elvind Opsvik on contrabass, and then Marissa Perel and Fritz Welch on vocals (with Pride) and percussion.

What happens is a hell of a row (in the best sense), wall of sound guitar and drumming cosmic bombast, vocal over-the-top expression. It is indescribable and wonderful.

The second half of the disk ("Some Will Die Animals") is a smaller-scale coming down: Pride with Opsvik and Welcome, plus Yuko Tonchira, with Marissa and Fritz, recitation. After the shattering half-hour of "Corpse" it brings you out but sparser relief and comes to conclude the disk on a satisfying note.

This is monumental outness, a triumph of sound mass and mayhem. It is a drumming collective from another world, but so much more than that. Not for the wary, I suppose. But free music and wariness never go together. Surrender to the void and let this music in. You'll feel better afterwards.