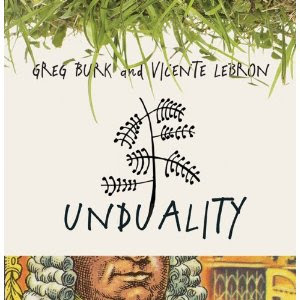 Keyboardist Greg Burk and Afro-Cuban percussionist Vicente Lebron do something rather audacious in Unduality (Accurate 5061). They take J. S. Bach's First Invention for keyboard and re-work, re-think, re-contextualize and re-situate it in a variety of variational settings. It's not really a set of duets (which perhaps in part explains the title) as mostly a set of alternating solos. There are one or two where both Burk and Lebron play together but mostly not.

Mr. Burk subjects the Bach Invention to a series of sonic and musical transformations. The sonic comes through in versions that include prepared piano, synthesizer and various electronic manipulations. Musically he displaces the rhythmic movement, thickens the harmonic texture, plays off on the themes freely, uses pauses, and generally creates a good number of variations on the piece. Lebron accompanies Burk a bit but mostly provides Afro-Cuban percussion interludes that contrast and re-contextualize what you hear. Are Bach and Afro-Cuban groove similar? Different? On the same plane? Co-equal partners in our musical world? All of that, the music seems to tell us. You hear Bach and you hear Afro-Cuban percussion differently when they segue together like this.

The grooves are magnificent; Burk's creative approach is provocative, satisfying and stimulating all at the same time. The seemingly irreverence with which Burk and Lebron operate is better seen as a truly creative act, a tribute to the powers of improvisation and the structural excellence of Bach's music. . . all of that. It's fun, serious and good for your ears. What more could one ask?
Posted by Grego Applegate Edwards at 4:53 AM