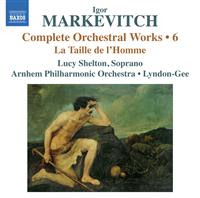 The story of Igor Markevitch the composer is most unusual and rather tragic. For eight years he was considered one of the brightest lights of European new music and he turned out a series of orchestral works that show a remarkable maturity for someone of his age. More important the compositions show a mastery of the orchestral palate and an originality that shine through today as you hear the best of the works. Then, abruptly, he stopped composing completely and went on to international acclaim as a conductor. He never went back. At the time of his death in 1983 only one of his works had been recorded, and that on a set of inferior shellac 78-rpm dubs.

Volume Six (Naxos 8.572156) of Naxos's Complete Orchestral Works introduces us to a major work he composed toward the end (1938-39) of his compositional career. La Taille de l'Homme was left unfinished, only half of the projected work survives. But those 55 or so minutes are impressive evidence of Markevitch's stature.

Scored for soprano (Lucy Shelton on this recording) and symphony orchestra (the Arnhem Philharmonic under Lydon-Gee here), the work has depth, orchestral luminescence, a bittersweet ethos and scherzo-like moments with a kind of grotesque, macabre quality. The world premiere recording is a very good one and gives you an excellent look at how Markevitch by that point had mastered his art. There are the influences of Stravinsky, Prokofiev and perhaps Milhaud, but the more you listen the more you realize that the at-first vague feeling that he doesn't fit into any of those model exemplifications has grown as you become more familiar with his work. Perhaps no more so than with the work at hand.

Anyone with an interest in the 20th-century music world cannot afford to miss the experience of Igor Markevitch. This recording of La Taille de l'Homme is a very good place to start.
Posted by Grego Applegate Edwards at 4:34 AM