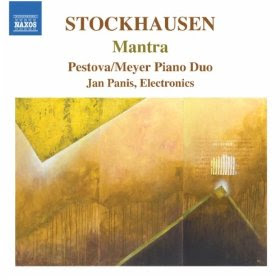 Karlheinz Stockhausen was without doubt an enormously important composer of the last half of the 20th century. If you are reading this you may well know that. He said something after 9-11 that was apparently misquoted and he became anathema to some during the period leading up to his death. We now can put all that behind us. A resurgence in the performance of his works would indicate that it is happening.

There are many aspects to Stockhausen's music. His music for the pianoforte is very much a central part of it all. The Klavierstuck series and the sprawling two-piano work Mantra would seem to all-but-assure a permanent place in the ranks of the last century's greatest music titans (though I could go on and talk about some other seminal aspects of his output).

So it seems appropriate that his Mantra has been the center of a new spate of performances and recordings. Xenia Pestova and Pascal Meyer have done a version of the work, recently released as a Naxos CD (Naxos 8.572398).

There are a couple of factors to consider when thinking of this fine new recording. First off, I am reminded of what John Cage said about one of his Variations works after hearing it performed countless times. The gist of his comment was that, as time passed and performances continued, the piece started to transform itself. At first, the notes and silences seemed like isolated punctuations in the fabric of aural life. As further versions came about, the notes came to have a logic not previously noticed. The notes became melody; the combination of notes, harmony. In part that was a matter of the listener's (Cage's) perception; but it also appeared that the performers were grasping the score more as music than as avant experiment.

The second thing that comes to mind was a review of Mahler symphonies I read in the New York Times years ago. I forget who wrote it, but he spoke of how Mahler performances, as well as the continued performance of other originally less-known works, could be seen as following a pattern. The more familiar the musicians-conductor-audience were with a work, the slower the tempo of at least some passages. The idea was that now that most everybody was accustomed to the music, it was time to savor it in a more leisurely fashion. As one of my professors used to say, it that is not true, it should be!

All this applies to the new Pestova/Meyer version of Mantra. The original DGG recording of the work by the Kontarsky brothers may be definitive; but the Pestova/Meyer version here generally takes things slower. It is more deliberate. And it perhaps brings out more the quality of the note values in the score. The Kontarsky brothers made the music seem strange; this version makes it seem familiar.

For example, there is towards the end a long and rather exciting passage where the two pianist drive into a long series of endlessly modulating, continuous lines. The Kontarsky brothers took it at a maddening clip, as a cosmic blast of sound. Pestova/Meyer take it slower, almost at a boogie-woogie tempo. And the note values are more specifically articulated at that speed. It is more a savoring of the familiar.

There are listener-perceptual issues involved in this too, as the allusion to Cage's comment above implied. In 1970, Mantra was at the very edge of the avant garde. Its use of live electronics, its added percussion colors as performed by the pianists, the incorporation of spacial silences, the introduction of repetition. . . all that seemed vitally avant. Listening to the new version 40 years later, I hear it as much more coherently musical. I get where it is and where it goes much more readily than I did when I first heard it back then. What I hear now reassure me that it is indeed a masterpiece of the era, fully worthy of revival now and appreciation in the years to come.

The excellent performance of the Pestova/Meyer Piano Duo in the Naxos recording helps me get there. It stands shoulder-to-shoulder with the original recording. It creates another space for the work that gives it another life for us in this second decade of the millennium. Bravo for that! And bravo for the recording!
Posted by Grego Applegate Edwards at 4:44 AM