Rued Langgaard and the Visionary "Music of the Spheres," 1916-18 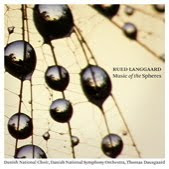 Danish composer Rued Langgaard (1893-1952) never received his due during his lifetime. He lived in the shadow of his more famous compatriot Carl Nielsen. His native Denmark afforded him few performance opportunities and, so it seems, he was faced with hostility and incomprehension.

Ironically part of the contemporary audience incomprehension was because he was simultaneously somewhat conventional at one moment (romantic) and presciently ahead of his time, surely with the Music of the Spheres work for large orchestra and chorus.

A recent recording by the Danish National Symphony Orchestra and Choirs under Thomas Dausgaard (Da Capo 6.220535) brings together all the stylistic elements of this Langgaard masterpiece for our wonder and appreciation. This is music with a mystical vision at work. The massed forces of full orchestra, choir, soprano solo and a smaller orchestra playing at a distance make for some deeply varied tone colors and gargantuan potency, the latter of which is only fully unleashed 30 minutes into the work.

What is most startling about the piece is not the post-Mahler reveries and Straussian thickness of texture of the tutti orchestra (though it all makes for an exciting piece of music). It is rather when Langgaard seeks to express the more cosmic programmatic elements of the music. There are soundscape-like ambiances, proto-minimalistic repetitions, and bold strokes of musical impasto.

A full analysis would be beyond the scope of this review article. It is a one-of-a-kind work; Langaard did some later interesting, and apparently, not as interesting work after his Music of the Spheres failed to capture the Danish imagination. But he never approached this level of invention.

The performances are excellent, sound is good, and several bonus works are added to the the program to round out our perspective on the composer's overall style shifts. If you've never heard this work the CD at hand gives you the perfect opportunity to unveil its abundance to your listening cycle for many years to come.
Posted by Grego Applegate Edwards at 3:59 AM