The International Street Cannibals Deliver Their First, "Ballets and Solos" 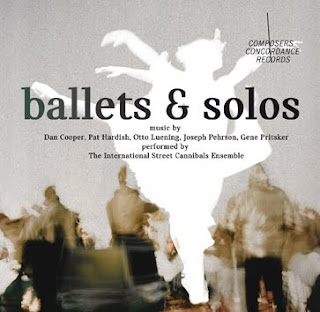 When a new label emerges that is run by a group of composers of new music, it cannot but be a good thing. Especially if those composers are dedicated to realizing music that will benefit from the greater depth of coverage that such a cooperative venture provides. That's the case with Composers Concordance Records and their first release (COMCON001). This is a grass-roots NYC uprising of an iconoclastic bunch who have been influenced equally by contemporary classical compositional stances as well as rock and other modern-day musics.

Ballets & Solos is a product of the composer-driven ensemble International Street Cannibals, conducted ably by Dan Barrett. They juxtapose three chamber ensemble pieces with a number of solo compositions. The group pieces have in common a rock insistency, especially Joseph Pehrson's "Good Time" and Dan Cooper's "Dance Suite." The latter piece even begins with a kind of heavy metal riff transfigured and extended in a contemporary classical mode. Gene Pritsker's "A Challenge in the Dark" has a mellifluous quality combined with the contrapuntal complexity of a post-Stravinskian sound world.

The solo pieces provide interesting contrast. Pat Hardish's "Solo for Pete" gives Peter Jarvis and his drum set a rock workout. There are two pieces by Otto Luening, both worth hearing, well-performed and spiced with a bit of vernacular and dance-music qualities, so they fit in well with the rest of the music.

The album concludes with Greg Baker performing Gene Pritsker's piece for solo guitar, "Dead Souls." This too has some clear and captivating references to dance music, echoes of some ghostly fandango of a lost age.

So here we have an auspicious beginning for Composers Concordance. Ballets & Solos is an agreeable, provocative and ultimately quite enjoyable excursion into territories both well-explored and unfamiliar. It bodes well for future offerings and I wish all involved much success in this venture!
Posted by Grego Applegate Edwards at 3:59 AM