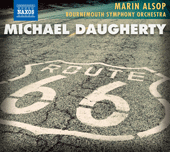 American orchestral composer Michael Daugherty writes melodic motifs that are neither cliche nor are they exceptionally original. What they are is distinctly American. They often draw on the music in the air out there, in the vernacular, in rock, pop, mainstream jazz, musicals, in the lounges and on people's i-pods, the sort of thing the mailman might whistle while making his rounds or the guy who is stacking cans at the local Shoprite. It is what Mr, Daugherty does with these motifs that constitutes his great appeal, his natural feel for orchestration and the flow of his musical syntax. As you listen to his new CD Route 66-Ghost Ranch-Time Machine (Naxos 8.559613) his brilliance at musical bricolage is apparent and palpable.

The new one consists of four evocative tone poems for orchestra, all written between 1998-2006, some in several movements, each lasting a relatively short time (between seven and 20 minutes), each tied into an implied descriptive verbal-visual program. So we have "Route 66," "Ghost Ranch," "Sunset Strip," and "Time Machine." Like Copland's "Appalachian Spring" or Grofe's "Grand Canyon Suite," Daugherty's music is geared toward a musical depiction of an aspect of Americana (except perhaps "Time Machine"). As you listen you know that this music should be accessible to a wide group of listeners. And why not?

Marin Alsop and the Bournemouth Symphony Orchestra do a smashing job realizing the music, as they have done on past releases (see this blog for an earlier review). The sound stage captures the detailed, brightly impastoed glow of Daugherty's orchestrations.

In short this is a release that should have great appeal. I found it delightful.
Posted by Grego Applegate Edwards at 4:28 AM