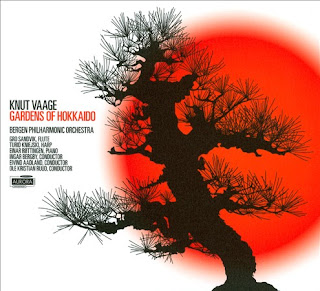 Norwegian composer Knut Vaage (b. 1961) writes orchestral music that is sensually modern.It is music that constantly moves along, transforms, yet has a discursive logic to it. The three works included in Gardens of Hokkaido (Aurora 5072) give a nicely rounded picture of the breadth and depth of his work, at least a part of it.

The title piece concerns a train trip the composer made from Tokyo to Sapporo, Hokkaido. The constantly shifting landscape viewed out the train's window is one of ever-unfolding change within a continuity of the cultural-geographic space and time of the traversal. And so the solo piano part begins with a motif that is passed around the orchestra in ever permutating form,while the context that the motif recurs in is also constantly shifting. As Magnus Andersson's lucid liner notes make clear, this is a kind of exposition-meditation on the Zen "it" of immanent presence, the suchness of forgetting the past to experience the ever-permuting moments of now. In the process Vaage gives us a rather thrilling concerto for piano and orchestra that is engagingly expressive, totally modern and beautifully crafted.

"Cyclops" revels in quietude alternating with moving sound-block edifaces--in contrast to the rather more boisterous, more multi-delineated preceding work. "Cyclops" is a long dark murmer (and the occasional growl) that underscores the texture that timpani and the lower ranges of the winds can provide in varying sound complexes. Parts have a murky quality, almost as if the orchestra were underwater (so to speak), only to emerge in moments of sharp and sometimes dense clarity.

The final work, "Chaconne," shows how Vaage treats the traditional form of the same name--a continually recurring chord sequence overtop of which is a set of variations. Here Vaage slows down what chordal sequences there are and writes some intriguing variations on variations where neither the chord sequence nor the theme is readily apparent. It is music of great atmospheric beauty, masterfully conceived for flute, harp and orchestra.

The Bergen Philharmonic under the various conductors do a wonderful job realizing this music and the sound is rather brilliantly transparent. In the end one is certain (after many listens) that Knut Vaage is a composer of convincing inventions, and a master of the present-day symphony orchestra. Very much recommended.
Posted by Grego Applegate Edwards at 4:27 AM