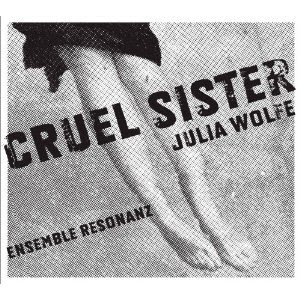 For all my exposure to the marvelous Downtown New York institution Bang-on-a Can, I have not had the pleasure of hearing much of the music of co-founder-composer Julia Wolfe. There is no good reason for this. It simply is an omission on my part. The situation has been rectified by listening to her new release of compositions for the string orchestra Ensemble Resonanz, Cruel Sister (Cantaloupe 21069).

The album contains two longish works: "Cruel Sister" (2004), based on the story line of an Old English ballad, and "Fuel" (2007), which expresses the very pressing concerns of energy procurement and consumption in our world today.

Ensemble Resonanz performs these works with a beautiful sonority, great animation and spirit.

Both works reflect a kind of post-minimalism, where there is repetition at times but it serves more as a structural element among other structural elements, just as some kinds of passage-work, ostinatos, and sonata form involved repetitions in traditional classical music. In Ms. Wolfe's music the repetition elements are sometimes more forgrounded than in, say, an 18th century work, and the sonority is more pronoucedly constitutive as well. The sound of the music is in no way neo-anything. It is the modernity of the present that Wolfe's compositions express.

Beyond that this is music of movement and repose, of personal expression and extra-personal sound sculpture. It does not particularly resemble anything either Bang-on-a-Can would typically do or the work of other composers that follow a post-before path. It manages to synthesize high-modernism with post-modernism, and so creates a sound (thanks to Ms. Wolfe's own singular inventiveness) that stands apart.

Multiple-listens are a must, as is always the case with very new music.

I now know that Julia Wolfe has something major to say in the new music arena. I recommend you listen too!
Posted by Grego Applegate Edwards at 5:29 AM