A New Recording of Schumann's Scenes From Faust 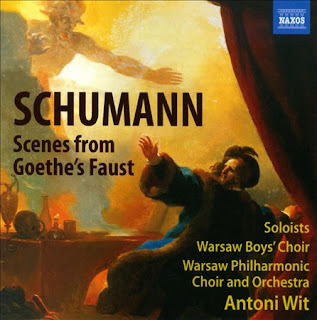 Classical music acolytes will know that Robert Schumann (1810-1856) fashioned a cornerstone of the romantic era repertoire primarily via his four symphonies, his concerto for piano and the one for cello, his lieder, his solo piano music and his chamber works. Compositions for vocal soloists, choir and orchestra are rather few and for the most part underperformed. So when a new recording of his Scenes from Goethe's Faust (2-CD Naxos 8.572430-31) becomes available, it is an occasion. The version at hand involves the Warsaw Philharmonic Choir and Orchestra, the Warsaw Boy's Choir and soloists, all under the direction of Antoni Wit.

This is a work that is typically Schumannesque in its melodic grandeur. There is a pronounced Beethovian influence in the opening of Part Two (specifically a rousing choral-soloist-orchestral anthemic huzzah related to the final movement of Beethoven's Ninth), as filtered by RS's own musical instincts and inspiration. The rest is more directly idiomatic to Schumann's music. It is also only natural that comparisons be drawn between Schumann's work and Berlioz's The Damnation of Faust. Scenes prefigures and precurses Berlioz in the nature of its overall thrust and, of course, the Faustian theme.

It may not be among the absolute top-tier masterpieces of its era. But it most certainly deserves reconsideration. The Wit-Warsaw recording seems a fit way to give the work a fair hearing. Orchestral sinuousness combines with balance, clarity and passion throughout. The soloists do a good job, and the amassed choirs are especially excellent. It is a fine performance.

At the Naxos budget price this one is hard to resist. Schumannites take heed!
Posted by Grego Applegate Edwards at 4:49 AM