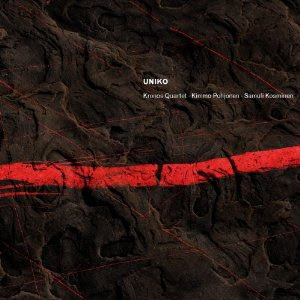 There are musical works that come along now and then that go beyond what categorical pigeonholing comfortably handles. Such music is all-the-more welcome in the sense that it expands the boundaries of possibility for music as we understand it in the present tense.

Such is most assuredly the case with the new Kronos Quartet offering Uniko (Ondine 1185-2), featuring the music of Kimmo Pohjonin and Samuli Kosminen. First of all, this neither sounds like or is a typical string quartet-chamber music suite (there are seven contrasting movements or segments involved). That is because the quartet is augmented by Pohjonen's accordion and voice and Kosminen's string & accordion sampling and electronic manipulation. What you end up with is something that sounds orchestral in texture, though with a quartet component that is central to the music.

Secondly, the music itself. It has some of the drive of rock, a minimalist element that does not rest on repetition so much as it makes use of it in passing as a way to flesh out structural moments (again sometimes in the manner of progressive rock, but also sometimes in the way of the more traditional classical use of ostinato). The variations that appear in parts of the work have a kind of fusionoid thrust meets dance-folk ornateness that gives the listener a new plane on which to hear the music. There are also (as implied above) Northern Euro-vernacular strains very much a part of the music--allusions to dance forms, folk melodies, etc. This is especially apparent in the accordion parts, but generally permeates the entire work on a number of levels. Thirdly there is a deeply resonant sound achieved in the electronic processing of the initial live signal and a sometimes attractively horizontal soundscaping that comes into play--not, though, in a consistently obvious or formulaic sense. That brings us to point four: the music most definitely eschews the formula as standard operating procedure. They throw out the book on what constitutes the expected way to do things today. Pohjonen and Kosminen meld all the various aspects together in ways that in no way sound rote or programmatic.

Finally, then, it is a musical experience that delights with unexpected juxtapositions, invigorates with the excitement and drive of the powerfully virtual ensemble in tutti overdrive, and brings in a wealth of musical content and continually varying sound color.

This is one of the most interesting and unusual bodies of music I've heard yet this year. It is like the Kronos Quartet to come up with unexpected syntheses that help define the 21st Century musically. They've done it once again, thanks of course to the considerable compositional and arranging talents of Pohjonen and Kosminen. It's one of Kronos's very best! That is indeed something.
Posted by Grego Applegate Edwards at 4:49 AM