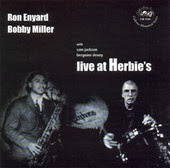 When fate preserves a single recording of a jazz artist who otherwise is not at all known, and that recording gives you a tantalizing glimpse of that artist's capability and talent, the feeling can be uncanny.

Such is the case with the recently released Live at Herbie's (Cadence Jazz 1234). It is a well preserved recording of a quartet holding forth at some length at a small Cincinatti club in 1967. Ron Enyard is on drums and swings with fire, Sam Jackson is at the piano, Bergoine Denny is on bass, and at the tenor is the too-unknown-to-be-legendary Bobby Miller.

There isn't a great deal known about Miller, except he was active in the '50s until his death in 1979. And from the evidence of this recording he deserved attention. An erratic lifestyle brought on by substance abuse apparently translated to times when his playing was not representative of how good he was. But then on other nights, such as the night this was recorded...

The disk captures three long numbers and a shorter set-ender on a tape recording typical of what you might get when you are documenting a gig--but it is quite reasonably clear for all that. The tunes comprise standard jazz improv platform-launching material typical of what you might hear in a club at the time. Within those parameters we hear the Bobby Miller we missed. He has great passion and facility, out of the bop tradition extended--with a sound and approach somewhere between Rollins, Gordon, and early-middle Trane. But that doesn't begin to capture the immediacy of his playing on this set. And the influences are secondary to where he takes the music. He is blazing!

Bobby Miller should have been a jazz star, based on what and how he plays on this CD. That he wasn't is tragic. We can console ourselves and revel in the man's artistry nonetheless on Live at Herbie's. A tantalizing and enriching listen!