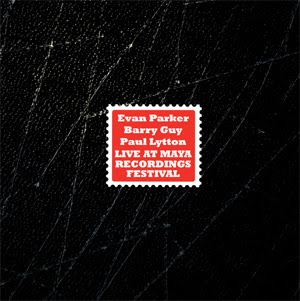 There are three long and one shorter improvisations involved. Evan plays in his patented soprano style (that circular blur of invention) but puts forward his tenor playing a bit more than is sometimes the case. And maybe I've missed some of his pretty considerable output in the last decade, but at any rate I notice something in his playing on tenor here that is perhaps evidence of an evolvement. That is, it is still about the sound, yes, but there is much more about the notes than usual. His tenor playing is phenomenal here. And it's note choice as well as timbre that stands out.

Barry Guy is firing up the bass in exceptionally expressive and impressive ways and the recording brings out his extraordinarily way quite sharply. Paul Lytton gets that excitingly busy wash of drums that makes him integral, as always.

And it's funny but on this one I feel like there is a direct link between the music and the classic Ayler trio. It's an extension, a development, but there is a rootedness that branches out of the Ayler-Peacock-Murray nexus in very nice ways. No one into the music would mistake the one for the other, but there's a real connection, a logical progression out of that classic lineup.

These are some of the very best of the Euro-avant masters, of course, and this is one of the very best recordings. It is powerful. It doesn't flag. And Parker on tenor was (and is) thrilling to hear on that night. But then they all sound perfect!